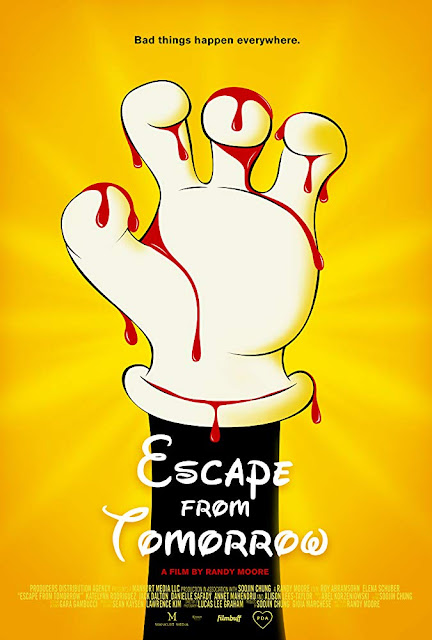 This review may contain spoilers.

Jim is a depressed middle-aged man that despises his family life but wants to try to hold it together for a vacation to the Walt Disney World Resort. Jim receives a call before they leave and, unfortunately, Jim has lost his job as well. It proves too much to handle as this trip to the Magic Kingdom becomes a hellish nightmare. Jim’s mind cracks as we watch him deal with Disney’s seedy underbelly. Complete with elaborate corporate conspiracy, undercover sex workers, and demons. Oh and two very young French girls that Jim lusts over. It’s gross.

The acting is amateurish. It’s nothing that’s going to win any awards or anything. The writing isn’t a prize either. A lot of the jokes, both visual and scripted, are very low brow and juvenile. These aren’t high points for the picture.

However, the actual product is very interesting. Escape from Tomorrow is a very low-budget, guerrilla production. The lengths that filmmaker Randy Moore went through to make this is impressive. According to Slashfilm, they filmed this movie using two Canon 5D DSLR cameras. I think I also saw green screen work and a little CGI too. Both were questionable at best.
When this was released at Sundance, people were afraid Disney would sue to keep the film from seeing theaters or leaving the festival at all. They didn’t. It’s available on almost every streaming service.

Escape from Tomorrow could have been a really special movie. The filmmaking process was alluring, but ultimately the amateurish jokes and content harmed it. I didn’t care about Jim. So I literally didn’t care about what was happening. But if you’re a fan of Disney then I would love to hear what you think.