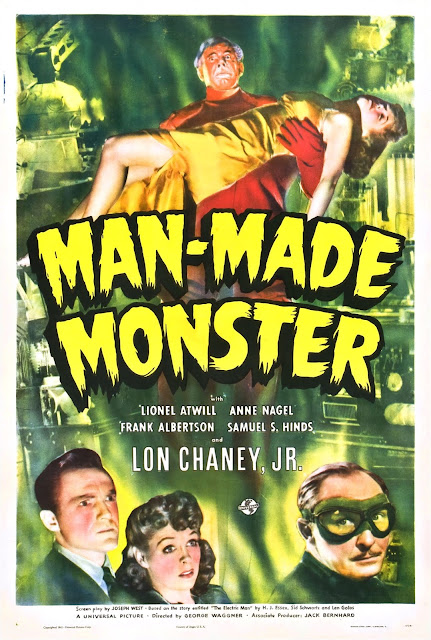 Man Made Monster is a short sci-fi horror movie from director George Waggner. Released on March 28th, 1941, this fifty-nine minute small-length feature from Universal Pictures features a huge cast. Lon Chaney Jr. stars alongside Lionel Atwill, Anne Nagel, Frank Albertson, Samuel S. Hinds and even Constance Bergen. Even with these actors and actresses, it was one of the cheapest films Universal produced that year. Man Made Monster had an estimated budget of $86,000. And it did pretty well at the box-office.

The film is about a stunt performer named “Big Dan” played by Lon Chaney Jr. Big Dan appears to have an immunity from electricity following a bus crash that had seen the electrocution death of five other people. Our hero Dan falls in with a strange mad-scientist that’s obsessed with electricity. Obsessed with pouring loads of it into Dan to create a sort-of superhero. A strange plot that seemed out of place among the killer ape movies of the period.

Man Made Monster is a movie I can safely say has been overlooked. It’s a high-quality film that was literally made from nothing. Yet it’s highly entertaining and important for launching the career of Lon Chaney Jr. with Universal. I had a great time watching this. Everything from the effects, down to the acting is really good. The story is original and felt great considering the time it was made. It’s not a movie that every horror movie fan needs to bare witness too before dying. But it’s a great little picture that aches to be appreciated during a late-night horror movie marathon.