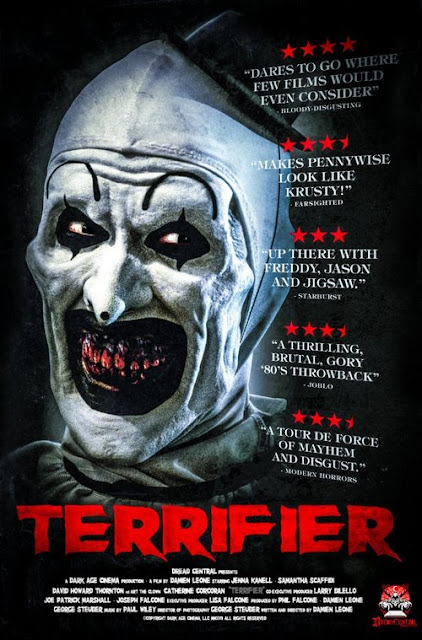 Terrifier is a 2017 supernatural horror movie from director Damien Leone and Epic Pictures Group. It’s based on a segment that appeared in the Damien Leone picture, All Hallows Eve. The film stars small time actors like Jenna Kanell and Catherine Corcoran alongside character actor, David Howard Thornton as the lead villain Art the Clown. It’s an independent feature that really pushes the boundaries with it’s graphic murders and gory special effects. All packaged up with a grindhouse estetic that makes it all the more creepy and cool.

Tara and Dawn get stranded downtown while heading home on Halloween night. Both are way too drunk to drive and are stuck in a really bad part of town. To make matters worse, they are being stalked by an extremely creepy clown that has a favorite pastime of slicing and dicing his victims. Now, Tara and Dawn have to try to survive the night with Vicky, Tara’s sister, on the way to pick them up.

The special effects in this movie are awesome! Tom Savini would be proud. All practical effects, and nary a drop of computer generated blood. The filmmakers aren’t afraid to let loose with just about every kill. In fact I would hope you could make it past the opening kill. It’s stomach churning in all the right ways. Art the Clown did a great job of being the main stalker in the movie. His kills were brutal and realistic. The live body dissection is the main scene that stands out for most people. It’s gross.

There are a lot of downsides. The writing is a little shoddy and they tend to pad out scenes with filler dialogue and pointless cuts. There is a delusional woman wandering around the picture that carries a doll she believes is her child. Art finds the woman and kills her. But I didn’t really see what purpose she held or why they included her. It felt a bit random. Also, the movie is pointless. There isn’t really a coherent story that’s being told, it’s mostly just killing in a clown outfit with the usual tropes.

Most of the actors leave a lot to be desired. However, David Howard Thornton does a great job as our terrifying clown killer. He is exactly what nightmares are made of. His mannerisms are down to a tee. Watching it back again, I was able to pick out the nuances that Thornton brought to the character. Everything worked so well and he was more than just a freaky clown. Art the Clown is the menacing force that brings the title to life. Terrifier. The other actors are going through the motions of generic horror roles. They don’t bring a whole lot to the party. But who cares!? This isn’t about the acting. It’s a horror movie. You came for the slicing and dicing. That’s just what Terrifier delivers.