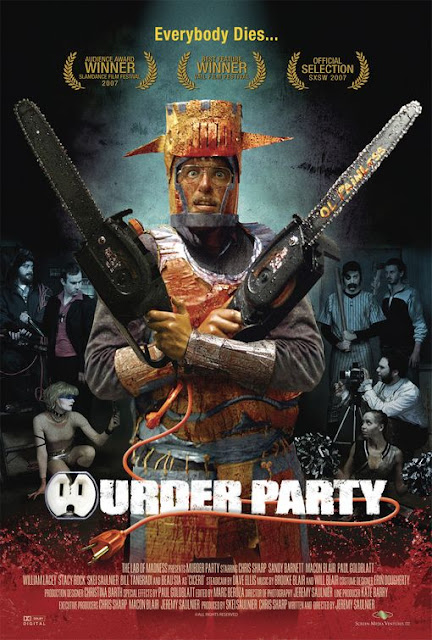 Murder Party is a 2007 independent horror comedy film from writer and director, Jeremy Saulnier. It did well on the independent film circuit, winning best feature at the 2007 Slamdance Film Festival. It stars indie actors, Chris Sharp, Sandy Barnett, Macon Blair, Paul Goldblatt and William Lacey. This has been on my watchlist for years. I always started watching it, and then ended up getting involved in something else. This time, I thought why not make this the first movie of the 2018 Edition of 31 Movies of Halloween. So here we are.

Christopher responds to a random costume party invitation that will be held on Halloween night. A Murder Party to be more accurate. Dressed as a cardboard knight, Christopher arrives to find a strange costumed group that has plans for him. Murderous plans for artistic reasons. They tie Chris up and begin discussing how they want to kill him. Unfortunately, things don’t quite go the way the group intends. A series of mishaps ensue leading to one hellacious bloodbath with Christopher right in the middle!

Actors/Filmmakers Paul Goldblatt, Sandy Barnett, Bill Lacey, Chris Sharp, Macon Blair and Jeremy Saulnier collectively form the The Lab of Madness. A group that had grown-up together going to school and creating movies. The group had started working on Murder Party after initial plans for a film called Moustache fell through. They couldn’t secure funding so the budget was very shoestring. According to Wikipedia, they had between $190,000 to $200,000 to work with.

Murder Party is a really fun picture. I loved the detail on the characters. Christopher (Chris Sharp) was great, and although he was a pretty sad dude, you felt for him. The members of the murder group were all interesting and all told their own story. Even the dog Hellhammer. I thought William Lacey was terrific as Bill, the quiet one. Macon Blair, the drunk one, was also good. We had previously seen him in the excellent independent horror flick Green Room.

This is a great movie that will make you squeamish but leave you laughing. I recommend this movie if you are a fan of horror comedies like Tucker and Dale vs. Evil or Club Dread then I would suggest picking this up. This isn’t a normal hour-and-a-half flick, it’s tight. They pack a lot of comedy, gore and suspense into a good hour-fifteen. Not bad. It’s a quick movie to digest, but it’s heavy. Filmmaker Jeremy Saulnier was clever about delivering witty humor with the gut-churning effects and not missing a beat.