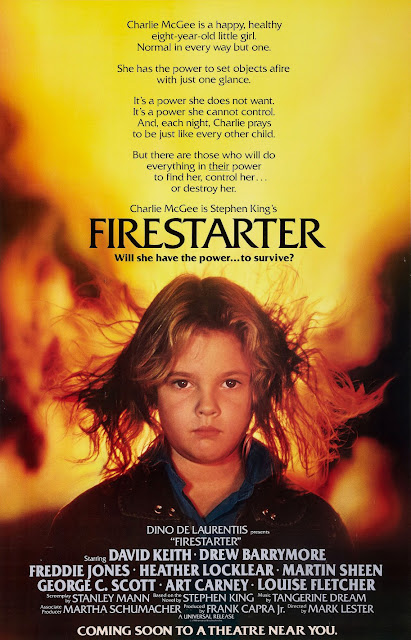 Firestarter is a science-fiction horror film released in 1984 and directed by Mark Lester. It serves as one of the many Stephen King adaptations released by the Dino de Laurentiis Company. This one is based on the 1980 novel of the same name. The film stars David Keith, a young Drew Barrymore, Heather Locklear, Martin Sheen and a miscast George C. Scott. The soundtrack is expertly provided by the eighties progressive rock band, Tangerine Dream. I had seen this movie a number of times before. But this was the only time that I actually sat down to review it. I am watching the Google Play version of the movie.

Andy McGee and his daughter Charlie are on the run from a secret government organization known as The Shop, that is seeking them out in order to lock them up for experimentation. Andy and Charlie both have a secret psionic ability. Andy can manipulate your mind, but Charlie can set things on fire just by looking at them. Quite a dangerous power for such a little girl to have. The Shop employs a mercenary, John Rainbird to hunt the pair down with the promise of obtaining the little girl for his own… uses.

This is a decent enough picture. It has a good story and the characters are all presented fairly well. George C. Scott is terrifying as John Rainbird, but he feels miscast. It’s weird since his character is literally the scariest part of the movie. There is a scene with Rainbird talking about hunting down Charlie McGee and getting inside of her… it’s just gross. It makes all the scenes of him lingering around her creepy. His breathy perseverance is perverse. It’s disgusting. Drew Barrymore was more convincing. It was annoying to see her cry and whine so much, but I liked the character of Charlie. She had good development, as that seemed to be the main focus of the film. Her relationship with her father is a good vehicle for growth.

The fire effects are pretty amazing for the time. But it doesn’t do much to make the viewing all that exciting. The showdown scenes are entertaining, but all the filler with George C. Scott hunting/tricking Charlie are boring and not very exciting. The editing was poor and direction is all over the place. John Carpenter was originally tapped to direct, but The Thing didn’t do very well at the box office, and he was replaced by Mark Lester (Roller Boogie and Class of ‘84).

Firestarter had always been a kinda guilty pleasure of mine. When I first watched the movie on television, I was too young to care about the Stephen King connection or the poor production. But as I got older I appreciated the loose threads to the Castle Rock universe. I began to understand that the movie was poor, but it still told the story and provided deep lore into Stephen King’s world. It’s best enjoyed in a marathon of bad King movies like Cat’s Eyes, Children of the Corn or Sleepwalkers. It’s not the best movie, but it’s not a bad way to kill an hour and forty-nine minutes.

This movie ties into other Stephen King works with the inclusion of The Shop. They are a government agency responsible for a lot of big events in the universe. They created Lot 6, an experimental drug that gave psychokinetic powers to Andy, Vicky and Charlie in Firestarter. This organization is responsible for unleashing the creatures in The Mist and Dreamcatcher. In The Stand, they were tasked with getting the superflu Captain Tripps under control. They failed. While not explored further, they are an interesting part of this shared universe.

Director: Mark L. Lester
Producers: Frank Capra, Jr. and Martha Schumacher
Writer: Stanley Mann
Starring: David Keith, Drew Barrymore, Freddie Jones, Heather Locklear, Martin Sheen, George C. Scott, Art Carney and Louise Fletcher
Music: Tangerine Dream
Cinematography: Giuseppe Ruzzolini
Studio: Dino de Laurentiis Company
Release Date; May 11, 1984
Budget: $10 million
Box office: $17.1 million
Did ya know: George C. Scott wears an eye patch over his left eye during the final half hour of the film which was due to the infection caused by the contact lens used earlier in the film. The eye was not quite healed and had to wear it to complete the filming of his scenes.