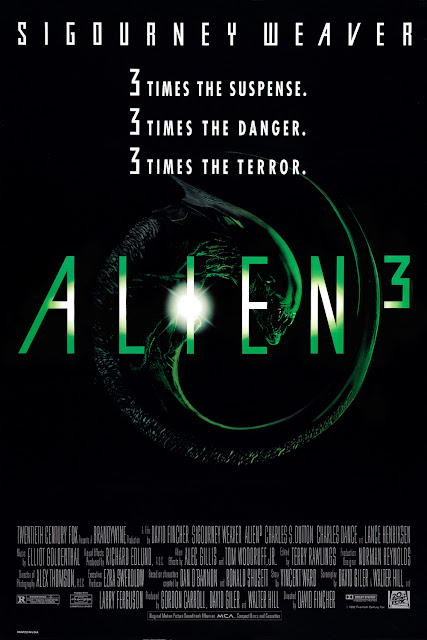 ALIEN³ is a sci-fi horror film from visionary director David Fincher. It was released on May 22nd, 1992 by 20th Century Fox to lukewarm reviews. No doubt this movie has a different feel than the previous entries. It’s far more bleak and depressing. The setting is different but the formula remains the same. Alien 3 marks another return to the franchise by actress Sigourney Weaver, returning to her role of the bad-ass, Ellen Ripley. Other actors include Charles Dance, Brian Glover, Charles S. Dutton, Paul McGann, Lance Henriksen and Holt McCallany.

Following the events of the first two films, Alien and Aliens. Lieutenant Ellen Ripley, Corporal Hicks, Newt and synthetic human Bishop are jettisoned from the Sulaco in an escape pod after a fire threatens the ship. The group are in stasis when they crash land on maximum security prison planet, Fiorina 161. Otherwise known as Fury 161. Unfortunately and controversially, Ripley is the sole survivor of the crash. Killing off the fan favorites and setting a dark tone for the remainder of the movie. The prisoners here on Fury are all male and have mostly all sworn to abide by a life of celibacy. Needless to say they don’t take to kindly to this woman that fell from the sky. Not to mention the horror that she brought with her in that escape pod.

Alien 3 was plagued from issues right from the start. It didn’t have a finalized script for a good portion of the production time. This caused a lot of frustration and confusion all leading to the original director, Vincent Ward, being replaced by newcomer, David Fincher. Fincher had been known for music-videos and short-films at this time. So, this movie would be a huge step in his career. However, the studio couldn’t keep out of meddling in the project. A huge sign that the producers didn’t have any confidence in this newfound director. Ultimately, this is why the movie has such a bad reputation. It’s also the reason why David Fincher had denounced the picture. The movie’s poor performance at the box office sure didn’t help things.

Growing up, I had seen this movie dozens of times on cable television. I remember watching it frequently, but being disappointed quite a bit. It bothered me that Hicks and Newt had to die. This is a big issue that this movie had suffered and continues to suffer from on review websites and from critics. It kills all momentum that the franchise had going forward and almost certainly killed the franchise altogether. You also don’t get much on-screen time with the Xenomorph. That always bugged me.

There are some really cool elements that this movie introduces. The setting is cool. Fiorina 161 is a cool concept, and I appreciate the effort in expanding the already interesting Ridley Scott Universe. I also really liked the prisoners. Sometimes it felt weird that so many inmates were from England, but after a bit - it felt natural. The Xenomorph in this one is one of my favorites. A Xenomorph/Dog Hybrid is badass, the few times you get to see it. I didn’t like the CGI parts. Most of the time is looked unnatural and off putting. But the practical effects were really well made.

Alien 3 is the worst of the original Quadrilogy. While I really like the idea of expanding the Scott Universe, the poor decisions and studio meddling hurt the movie and left a bunch of gaping holes. I really wish this feature turned out better than it had. It has entertaining scenes and a cool concept, but it was executed poorly and couldn’t maintain the quality that the first two movies had done. I suggest watching this along with the other movies Alien, Aliens and Alien: Resurrection.