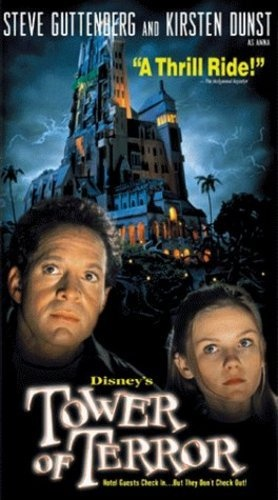 The Tower of Terror was an episode of The Wonderful World of Disney, which appeared in 1997 on ABC Network. It’s a fun movie that makes a creative connection to a ride in the Disneyland California Adventure theme park of the same name. Tower of Terror truly has the Disney look and feel. It fits right in line with a movie like Hocus Pocus or Haunted Mansion. In fact, do yourself a favor and set-up a little marathon. Those movies aren't great but it’s a fun way to pass a late October afternoon.

Tower of Terror follows Buzzy, a single dad (Steve Guttenberg) taking care of his daughter Anna (Kirsten Dunst) in Hollywood, California. Buzzy is a tabloid reporter that desperately wants to start writing legitimate material again. Abigail Gregory had tapped Buzzy to investigate the Hollywood Tower Hotel. An infamous haunted hotel that had been gained popularity for some righteous parties. However, the disappearance of five people in 1939 on Halloween is what it is known for. The group had been in an elevator when the hotel was struck by lightning. This kick-started some sort of black-magic that swallowed all passengers of the elevator that night. Buzzy agrees to help and starts his investigation. Everything points to a witch among the original group from ‘39. However, mysteries start to unfold. Guttenberg is on the case!

The actors did as good as they could be expected too. Obviously, Steve Guttenberg is the lead actor here. And with good reason. It’s pretty much just him. Kirsten Dunst does alright but her character doesn’t evolve much. Michael McShane is the next best. He is always funny. He is a master at timing and physical comedy. The other actors are kind of blah. The beginning of the movie shows us 1939 and the night that the people disappeared. However, it never really feels like ‘39. It looks like a poor interpretation of what a shined up version of the thirties would look like if it were made in 1997. The actors are too peppy. The thirties are too shined up. It’s too happy. Nothing looks real.

The movie isn’t necessarily scary. Tower of Terror has supernatural elements that are constrained in this neutered made-for-television short film. But that shouldn’t serve as a distraction. The movie still works on a number of levels and younger viewers will appreciate the minor scares. In fact, it might be too much for the very young and meek. Don’t let the fact that it’s a Disney movie fool you. You won't have any singing birds or other doe-eyed forest folk here. This movie exists solely as a minor thriller for pre-teens.

This movie was one of the first VHS tape that I had found when I started collecting. I think I found it sealed at a thrift-store for twenty-five cents. You have to love old media like VHS. It’s such a classic format. Of course this movie is more-than-likely available in higher resolution. However, watching it on VHS brings a sense of nostalgia. It’s a kind of nostalgia that belongs with a movie like this. It’s that warmth that Disney strides for.

Director: D. J. MacHale
Producer: Iain Paterson
Writer: D. J. MacHale
Starring: Steve Guttenberg, Kirsten Dunst, Michael McShane, Melora Hardin and John Franklin
Studio: Zaloom/Mayfield Productions, Walt Disney Television & ABC
Release Date: October 26, 1997
Country: USA
Did ya Know: Most of the tower footage in the film, both interior and exterior, were shot at the actual Tower of Terror attraction at the Disney's Hollywood Studios. Every time the hotel is seen from the outside, the Hollywood sign is seen behind it. In the 1939 sequence, the sign reads "Hollywoodland" which was the what the sign said back in those times. Steve Guttenberg and Nia Peeples would co-star in another TV movie together with 2015's Lavalantula. 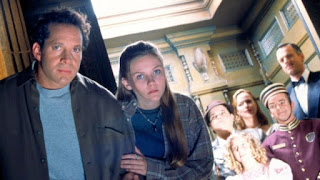 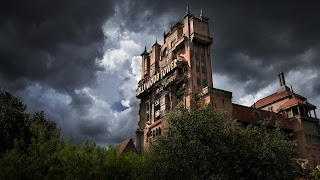