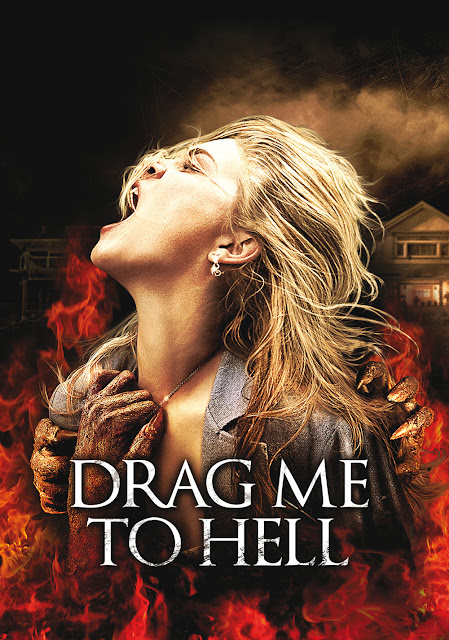 Sam Raimi is a tried and true director in the horror genre. You should already be pretty familiar with his work in creating the Evil Dead franchise and bringing Spiderman to the big screen. He has a very distinct style that mimics graphic novels and comic books really well. It's very apparent here with Drag Me to Hell.

Christine is a loan officer at a bank that has the displeasure of rejecting an older gypsy woman for an extension on a loan. This proves to be bad for her as the woman attacks and places a curse upon her. She deals with many creatures and demons while surviving an incredibly creepy situations that will eventually lead to her burning in Hell forever if she doesn't end the curse.

The film has some really creative elements. It pulls from every horror cliche cache that Sam Raimi has in his mind. It just doesn't execute them properly and it over does it with CGI. One scene in particular has the corpse of the elder gypsy woman pulled over a distressed Christine. Our young banker screams for help as CGI embalming fluid flows freely and violently into her face. However, her mouth never fills with the liquid and she doesn't seem to be having a hard time yelling. It's gross but impractical.

Justin Long and Alison Lohman do a great job with the story they are given. However, the movie seems flat and two dimensional. Aside from a few choice scenes, this movie doesn't really have enough to keep me fully engaged. The overbearing political commentary is too big to ignore here. This movie was made right as America was pulling out of the economic recession of '08. It used the real life plight of many poor Americans as a driving force behind the antagonist. This made it a kind of retelling of the Stephen King story Thinner. I thought Thinner was better.

The movie has some really tremendous scenes that are creative. They actually make for some amazing stuff. But like I said above. The movie doesn't execute very well. It almost feels rushed. And that's a shame. The movie is still scary enough to give nightmares to kids so keep that in mind. This is a good one for horror movie parties or late October evenings.