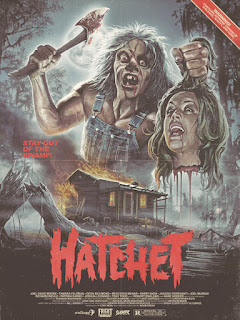 Hatchet is a really brutal and gruesome slasher/comedy movie about a deformed psycho killer in the swamps of Florida. The movie is incredibly graphic and gory, just what I love to see in a horror movie. The movie has some really hilariously over-the-top special effects that are brought to us from our good friend, the director and creator of Troll, John Carl Buechler. He even has a short cameo as Jack Cracker. Keep an eye out for him. Hell keep an eye out for tons of cameos. Robert Englund, Tony Todd, Kane Hodder, and Josh Leonard all get in front of the camera in some fashion.

The movie is about a deranged killer that mutilates anyone that sets foot in his swamp. Not only is he a huge bulking mass. He is also deformed from an accident in which his father hit him in the face with a hatchet. That is part of the reason he is so angry. The movie follows a young dude that is depressed after being dumped by his serious girlfriend, his buddies try to take him out to Mardi Gras but he would rather drag them along on a haunted swamp tour instead. Enter Victor Crowley, aka Hatchet.

This movie is a tribute to the amazing slashers that came before it. If you want a really fun movie to watch during a party, this is it. It is a really entertaining film that keeps you watching it. If you are a fan of references then you aren't going to be disappointed. This movie is full of them. This movie lives right up to its tag line. This is Good Old American Horror.

Yeah, well your nipples are dumb!