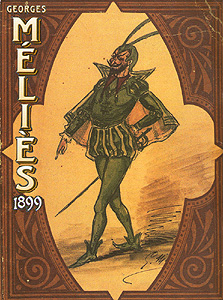 Le Diable au Convent is longer than the two previous Georges Méliès ventures into short form horror. This particular French short shows the Devil himself running a convent and terrorizing the poor old nuns that live there. However he is finally vanquished by the good of Faith.

This is yet another Méliès classic, showcasing the art work that really goes into his short film-making. This is one of the earliest examples of a horror movie that could rely on its elaborate set design and artistic design. Everything in this film, although horribly aged, has been packaged extremely well. If you are a fan of production and set design then I would highly recommend just about anything that Melies has his name on.

Though nothing that is considered too extreme actually happens, Satan does have his way with a convent. The satanic imagery itself must have kept this film on the traveling carnival circuit. It certainly wouldn’t fit into the good moral bag that society shoved itself into back in those days. That would be the only vice the entire movie has.

Amazing art and suggestive content have me wanting more from Georges Méliès. Three shorts in and he hasn’t lost me. Lets see how he does after the turn of the century. Films are just going to get longer and better.

Put your faith in Moi.

initialAC said…
amazing. I never saw this Melies film. I love his Artistry. He never bores me and keeps me locked in the tale he produced. Thanks for sharing this fine film.
October 24, 2012 at 4:38 AM

August 20, 2015
What can be said for mindless schlock pictures like this one. They were pumped out in droves during the eighties. Inseminoid !? give me a break! It sounds like some pre-pubescent teenage boys came up with the title. On the plus side the movie isn't horrible to look at and it has a decent amount of gore. If you can separate yourself from the political incorrectness, then you might have a perfectly decent Sci-Fi Monster Feature.  A research team exploring caves on Jupiter accidentally awakens an ancient alien that rapes and impregnates one of the team members. She suffers from terrible shock and trauma, leading to a complete mental breakdown as her pregnancy accelerates faster and faster. Feeling threatened she decides to kill anyone she deems a threat. Can the rest of the research team survive or will they all become victims of INSEMINOID! Apparently this movie had a million dollar budget. That's really shocking considering the outcome of the picture. The acting
Post a Comment
Not scared yet? »

April 14, 2017
The Stand is a phenomenal Stephen King novel that was adapted into a pretty decent TV movie of the same title. It was released in 1994 and boasted a huge cast of stars and cameos. I had always been hesitant to see this film since it was a made-for-television picture. However, after watching Stephen King’s IT my hang-ups were put to rest. What I discovered is a movie that is charming, thought provoking and a bit unnerving. While it isn’t without it’s own issues. The Stand turned out to be a pretty great picture.  A super-virus is released on the world that wipes out millions of people. This horrific act summons the demonic Randall Flagg to kick start the Apocalypse. However, there are a large number of those that were immune that are not going to let the world burn. They form a resistance and vow to take a stand against the evil forces of Flagg.  The narrative interweaves the individual stories of a lot of different characters. The most impressive part of this flic
1 comment
Not scared yet? »

October 05, 2010
Watching Japanese horror is similar to watching British comedy. If you enjoy dry whit then you probably enjoy the boys of Monty Python in drag. That's the joke, they're dressed like women. Get it? Well, that's British humor. But if you're like most Americans you probably prefer Adam Sandler farting his way across a football field and hooking up with chicks that are way out of his league. Americans usually prefer this more in your face, crass brand of humor. My point is funny in England is different from funny in the US. The same goes for J-Horror. What the Japanese consider scary is very different from what Americans consider scary and it shows in this horror film. Japanese horror is generally slow (a little too slow sometimes), suspenseful and creepy. Ju-On is a creepy effing film. The movie has almost no soundtrack. It is incredibly suspenseful and the pay-offs are pretty awesome, but I think that it was done better in the American version (cultural t
Post a Comment
Not scared yet? »