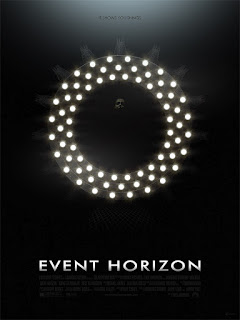 So I guess this is one of the last good movies by Paul W.S. Anderson, well this and Resident Evil are about all I can stomach of his. The first part of the movie is amazingly mysterious and scary. It has a feel to it that makes you believe that this is going to be a scary f'ng movie. Then the second half kicks in with this "Hellraiser in Space" feel to it, and it kind of lets you down. The movie doesn't let me down enough to say that it doesn't scare me, which it does. However the end seems really thrown together and rushed.

A ship, the Event Horizon, has resurfaced after a long period of time with a completely slaughtered crew and a bunch of creepies all over the thing. A rescue crew is hauled in with a scientist that built their Hyper Gravitron or whatever to find out what happened to the crew and where the ship has been. Spooks and Scares ensue.

This movie was made in 1997 and you can see that the budget was pretty good, yet the CGI wasn't fully developed and it looks today like your watching a scary video game. (ex. Resident Evil or Silent Hill) Good acting and a pretty decent storyline are what is helping this movie along with me. There are some really gruesome shots toward the end of the movie which I really enjoyed, for me Gore kind of plays as its own little art form.

Event Horizon will keep you sitting in your seat for the entire hour and a half. Its entertaining and has enough scares to make you jump in your seat when you watch this in the dark.